"This is Jimmy"
―Jimmity Raynor

James "Jimmity" Raynor is a silly Coop commander in StarCrafts and a ranged assasin hero in HeroStorm.

Jim Raynor is a former terran marshal turned rebel, who has become one of the major figures in the Koprulu sector through his work to bring down the Confederacy and, later, in the struggle against the Confederacy's successor, the Dominion. Raynor is one of the few terrans to engage in a long-term alliance with the protoss.

Raynor's design is similar to a marine, apart from being gray in color and the visor being usually open. He is shown in episodes of StarCrafts and HeroStorm to be silly and somewhat childish. He is often seen with his tongue sticking out, similarly to Derpfestor from StarCrafts. He sees his weapons as toys, such as his rifle or battlecruiser and makes a lot of spit noises. 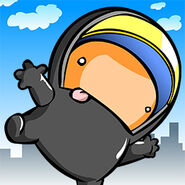 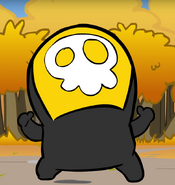 Add a photo to this gallery

Retrieved from "https://carbotanimations.fandom.com/wiki/Jim_Raynor?oldid=9666"
Community content is available under CC-BY-SA unless otherwise noted.